This was important milestone and quite honestly an important emotional day for me. I had to dig deep many times and remind myself why I decided to do this and why I will continue to do it. I’m happy about my day but not 100% satisfied I’m sure many better and worse races are yet to come 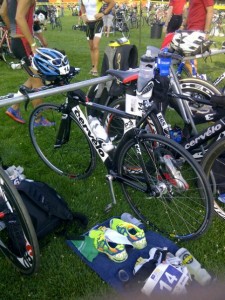 The day started pretty well, I was rested well and felt calm, Diana certainly helped in that department. We did a quick swim warm up just in time for the start. I felt good through the first half of the swim, the second half was a bit tougher and my pace dropped. I obviously need a lot of help in the swimming department, it might be too late now but this would something I will definitely work on the next winter.

T1 went pretty well. I think I finally managed to get hang of things in transition

The Ride:
Overall it went pretty well. I was a bit uncomfortable on the ride back and had slight mechanical at 20 K into the ride which I have myself to blame for. My chain came out due to some bad shifting. Unfortunately it was at the start of the hill so I ended up losing more time there.

Beyond that, the ride back was a long haul of me battling the cramps. The cramps were both on my thighs and calves. In one way they worked well for me because I was not able to reduce the pressure on the pedal as the cramps would get worse but I was a bit worried about the run. The cramps got better over time but they did come back towards the end of the ride. The rest of story is on TrainingPeaks, at least the VI is not as bad but I think I still need to work on a few things.

As for nutrition, I stuck to the plan but I think I can perhaps make some adjustments in that department as well. I didn’t necessarily felt low on fuel but I as you’ll see later I may need to do something a bit extra for the start of the run.

T2 was also smooth, although (this is probably normal) when I got of the bike, I had some serious pain in my legs which went away pretty quickly.

The Run:
Terrible is probably the right word to describe the run. It started with some cramping which I ignored as I was sure it would get worse if I stopped. I kept the pressure for the first 2 K and at some point the pain became unbearable so I walked about a 100 meters. I restarted after getting some Gatorade at the aid station, but here is where I felt I could use some extra nutrition, I did have some gels with me but I didn’t want to deviate from the plan of drinking Gatorade so I avoided them (Note to self, Need a plan B). I was feeling alright, slower pace between 3 and 10 but it was between 10K and 14K mark where I really blew up on those hills, I simply didn’t have the legs to run them. Interestingly after 14, I picked up the pace again and I did much better, but the damage was already done.

Some pictures of the race can be found here:
http://www.finisherpix.com/search.html?pcevent=0199&bib=14