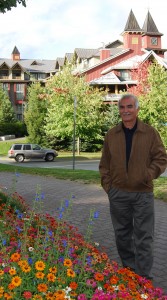 I had a pretty good weekend when in terms of training, partially thanks to the weather and my good friend Ali. On Friday we went up to lake Wilcox, put in about 2 K of swimming and then went for a 50 K ride, not bad compare to my previous Canada days.

On Sunday, I rode from my House to Mississauga (appx 30K) followed by a 30 min run. While running I found myself daydreaming about that finish line in 412 days, in fact I was thinking about what I’d be doing during the last 200 meters of the run and I think I was either talking to myself loud or was making weird hand gestures while having these thoughts cause when I woke up I noticed 4 older ladies that were walking toward me looking at me like I’m someone that has been running in the heat for too long

Over the last few days, I’ve downloaded and watched 4 NBC Ironman specials.Too many fascinating stories to mention here but one thing they all have in common is that every time I see that finish line I get all teared up, yes I’m cheesy but a tough one